[Stay on top of transportation news: Get TTNews in your inbox.]

A new Idaho Trucking Association program using a truck simulator that travels to high schools appears to be paying off, getting teens interested in driving careers.

Allen Hodges, president and chief executive of ITA, said the association started the program because trucks were sitting idle in parking lots rather than hauling goods due to a shortage of 5,000 drivers in Idaho. The national shortage of commercial drivers is estimated at 80,000, according to the American Trucking Associations, and Idaho’s efforts are among many across the country to attract young truck drivers.

The truck and trailer used for the simulator. (Allen Hodges/Idaho Trucking Association)

In January, the Federal Motor Carrier Safety Administration created the Safe Driver Apprenticeship Pilot Program. It is intended to train drivers under the age of 21 for interstate commerce who were previously limited to intrastate operations. Additionally, a Louisville, Kentucky-based initiative called Next Generation in Trucking Association educates high school administrators and students about careers in trucking.

The Idaho Trucking Association raised $70,000 to purchase the truck and trailer, with the state contributing $242,000 as part of a Workforce Development Training Fund grant.

“Using the simulator to introduce students to a career in truck driving is more effective than talking and using literature and pictures,” Hodges said, adding that boys and girls were equally interested in becoming drivers, many wishing to enter a second time. . 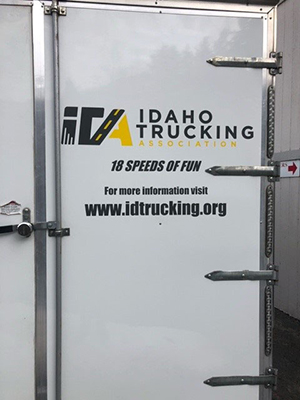 The back of the trailer used for the simulator. (Allen Hodges/Idaho Trucking Association)

The new simulator program — which features multiple driving scenarios in a realistic experience — is so popular that 20 high schools requested it within the first 24 hours after it was unveiled Jan. 26 at Middleton High School, Hodges said.

“The students really enjoyed the simulator,” said Middleton School District Superintendent Marc Gee. “Several said it was a good opportunity to see what it looked like. Several, who have driven larger vehicles on their farms, noted that it looked realistic from what they had seen before.

Trucking is essential to the free and rapid flow of commerce. Providing students with this hands-on experience is key to meeting the desperate need for a new generation of drivers. https://t.co/7qCbpzutsl

Gee recommended this kind of hands-on approach with teenagers to “spark ideas for future careers” in truck driving. “As educators, we are thrilled any time we can help students see and grow into a positive and productive career,” he added.

Another indication of the early success of the simulator program is that it can lead to a high school curriculum for commercial driver licenses.

Gee said he has “opened a dialogue with our state Department of Vocational and Technical Education about the possibility of creating a pathway in high school to prepare students for their CDL after graduation.”

At 18, teens can get a CDL to drive trucks in the state, which Hodges says would help ease the driver shortage with jobs available for dump and beverage truck drivers.

While commenting that it’s hard to predict how many students will pursue trucking careers, he says he knows four motivated teenagers who are already driving trucks on farms, and 40 others who are very interested. 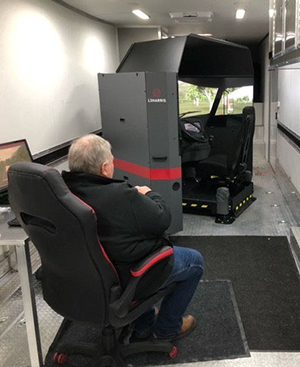 The simulator is installed inside the trailer. (Allen Hodges/Idaho Trucking Association)

The simulator is taken successively to schools in the same region to maximize efficiency. The ITA requires that a minimum of 50 students, ages 15 and older, enroll in a school.

Hodges recently heard of a teacher who requested the simulator because it provides an important alternative career for students who aren’t interested in attending college.

The grant requires the simulator to travel statewide and be shown to 2,000 students. Hodges said he applied for the grant in September and was accepted a month later.

Hodges encourages other state trucking associations to use simulators because “it’s a great teaching tool and one of the best ways to introduce students to trucking careers.”

The simulator training was designed specifically for high school students after the age requirement to drive a truck was lowered nationwide. MIDDLETON, Idaho — The Idaho Trucking Association introduced its new simulation training program Wednesday at Middleton High School, the first of many planned stops for schools across Idaho. Simulator training was designed specifically for […]

HERO: A Hackensack driving school instructor brushed off a violent carjacker as he attempted to pull another carjacker from his vehicle, authorities said. Adult students were taking classes in the Stop & Shop parking lot on West Pleasantview Avenue when Isiah T. Pringle, 31, of Albany, approached one of the vehicles, Capt. Darrin DeWitt said. […]